I GOT TO HAVE AN INTIMATE DINNER WITH VERONICA FREAKING ROTH!! You freaking bet your cutie batootie I’m going to write a blog post about that. I haven’t written one of these in a long while, so dust off your high expectations and let’s dive into this long-ass fangirling!

First things first, if you don’t know who Veronica Roth is, you probably do know her books. She’s the international best selling author of the Divergent series and now has a new duology out called Carve the Mark. The first book of the series was published in 2017 and the following novel, The Fates Divide has recently been released. If you would like to learn more about her, clicky here 🙂.

I am NOT by any means a ‘fancy human being’, so being able to go to this fancy-ass restaurant was definitely an experience, but I want to start before the actual food part. I arrived at the super fancy hotel/restaurant with my best friend and fellow writer, Alex Butler. Understand, that neither of us are fancy people, so it took us a while to even find the entrance amongst the all glass walls. Then it was locked, soooo… we just loitered for a bit, bickering over the situation at hand until another V. Roth fan moseyed up to the door.

She never told me her name, let’s call her Fan #1. Fan #1 also had no idea where we were to go. We could see the sign to the restaurant but it was sectioned off and we had no means of getting inside. It felt like one of those moments in a book where there’s a need to devise a plan in order to complete a mission.

We did not create a plan.

Eventually a lady… or was it a man? Either or, we got the attention of someone and they let us in! Success! 🎉 We were the only ones there, but I mean, we were half an hour early. So, there’s that. We didn’t talk to Fan #1, she sort of just went somewhere else. They told us we could go inside, but there were only fancy people and fancy tables inside. It was hella intimidating, so Alex and I remained on the deck. (What do fancy people call an outdoor sitting area?)

After a few moments, a girl with a hella cool Pokemon backpack made an appearance and we started talking to her. She DID tell me her name, but I forgot. So… Fan #2 was a writer. And as the night progressed, we discovered that most of the crowd were writers. WE WERE A MAJORITY FOR ONCE! But that’s not the point. Fan #2 had written a book, finished it and was ready to show someone, but not just any someone, she wanted to get V. Roth to read it.

We asked about her novel, super keen about the entire plot. I’m not going to say it because it’s her story, not mine. But! It definitely sounded stellar!

The night progressed, we eventually mustered up the courage to find our seats inside. There would have been about 20 maybe 30 of us. Fan #2 was at our table, but she was at the far end from us. We didn’t really socialise with anyone at the table at first, Alex and I were too busy FREAKING OUT. Not over V. Roth, but over the fact, how do you eat at a place like this? So much cutlery, for what?

We devised a plan.

We kept an eye on what everyone else was doing… and still did it wrong. I still don’t know the right way about it. 😬🍴 It said that it was a two-course meal, but we were served three courses, so I’m confused. I don’t understand fancy people, so, bare with me.

We were served five different Canapé Platters to set us off. This was before Veronica had arrived – so we were all nervously eating and awaiting the arrival of the author. None of us at the ten-seater table were really in any mood to start talking to one another, so we pretty much ate food and took pictures. 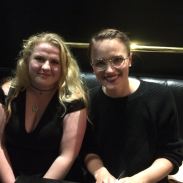 Then the woman of the hour arrived! It was fantastic. We got to learn a bit about her and what she knew of Australia. She loves wombats and learned that drop bears… wait, never mind. That bit is an Aussie secret 😘

Then we talked all things Carve the Mark. It was truly wonderful. We then got our books signed and got to have a quick chat with her before she moseyed on her way and we had a marvellous dinner and dessert and began to have a chat with the incredible people at the table. It was a fantastic night and I honestly wish I could do it again.