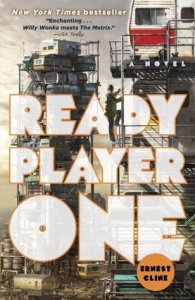 Written in 2011, Ready Player One had its movie rights purchased and ready before publication. In the year 2018, this book will be a movie, and there are many ways they could go so, so, so very right with this adaption, however, we’ll just have to wait and see.

Goodreads Description:
In the year 2044, reality is an ugly place. The only time teenage Wade Watts really feels alive is when he’s jacked into the virtual utopia known as the OASIS. Wade’s devoted his life to studying the puzzles hidden within this world’s digital confines, puzzles that are based on their creator’s obsession with the pop culture of decades past and that promise massive power and fortune to whoever can unlock them. When Wade stumbles upon the first clue, he finds himself beset by players willing to kill to take this ultimate prize. The race is on, and if Wade’s going to survive, he’ll have to win—and confront the real world he’s always been so desperate to escape.

I have to admit that I’m not the biggest Science Fiction reader. I love Fantasy – love, love, love fantasy, but Science Fiction? Usually I need to warm myself up. Mentally prepare myself for a Science Fantasy book. Normally, I don’t mind a slow start. Both Fantasy and Science Fiction alike are known for their relatively slow starts, mostly due to world building and character introduction, but this book was slow.

It felt as if I had reached the halfway point before the pivotal point actually happened. Before what everyone and anyone who reads this book is waiting for. I remember constantly messaging my friend who had read it, asking when it picked up. It of course, it did pick up, but I couldn’t help but feel that some of the information at the beginning could be condensed or spread throughout the novel. It was an info dump.

When it finally did pick up, it never seemed to become dire to read. I found myself at a steady pace, able to put it down whenever I wished. Come back to it later. I did become intrigued with all of the characters, wanting to know a little more about all of them. Especially being a romantic at heart, I wanted to know all about Wade’s relationship. I’m a sucker for romance, and I’m absolutely not ashamed to admit it.

I never found any of these characters straying from what I would expect them to do, and perhaps that’s a bad thing. Maybe they should have branched from who they were introduced to be. However, it’s not a pivotal point of my review. It’s not necessarily terrible that it only seemed to be Wade that grew from the experience. He seemed to be the only one that changed, took a step out of the box Ernest Cline had placed him into to begin with. Despite this claim, these characters were relatable and over all, fun — especially when they’re together.

By the end of this novel, I was left with questions. Regarding the climax and everything leading up to it. I had so many questions that I needed to have answered, not about the characters but about the world, the law and definitely the security. Yet, I never got the answers to my questions, and perhaps that’s another reason this book’s stars got dashed. I want to be able to completely push through a book without finding it littering with tiny little plot holes. It needs to be realistic in that world, and to me, it wasn’t.

I maintain a huge belief that books can get millions of positive reviews if the concept is good enough. This concept was definitely good enough. It was a flash into a future that could’ve been and still might be. It was jam-packed with 80’s references that any one from the generation or any one that is just a fan of the era would relate to. You don’t need to be a gamer, or even an 80s fan to read this book. Anyone could read this book and understand it perfectly.

This novel could be better, but it’s still good. I suggest taking my opinion into consideration, but remember that everyone has their own take on the world and on the books they read. So take it with a grain of salt.

One thought on “READY PLAYER ONE – Ernest Cline (Honest Review)”